We have a relatively nice house. Of course, there is no insulation or central heat/air conditioning and the windows don’t exactly seal. The temperature in Kijabe ranges from the mid-60s to mid-80s Fahrenheit during the day and upper 30s to 60s at night. We live in the southern hemisphere, so winter is June to August and summer January to February. For the most part, the temperature outside is reflected in the house. Kijabe is a Maasai word which means place of wind, so it can be very windy – especially at night.

We do have water – most of the time. Water pressure and cleanliness vary greatly and you definitely shouldn’t drink it out of the tap unless you enjoy gastrointestinal issues. The water system in Kijabe is quite complicated with springs and water storage tanks. Suffice it to say that water comes from various springs into Kijabe and is shared among the institutions and houses. I use the word “springs” loosely – picture something more like a collection of rain water in a pond. These springs often run dry during the dry seasons. Therefore, all institutions have large holding tanks to provide several days of water for those times when none is coming. We live in Moffat Bible College housing and Moffat has five large plastics tanks (two recently added) and one large concrete tank up the hill a bit to provide adequate pressure. 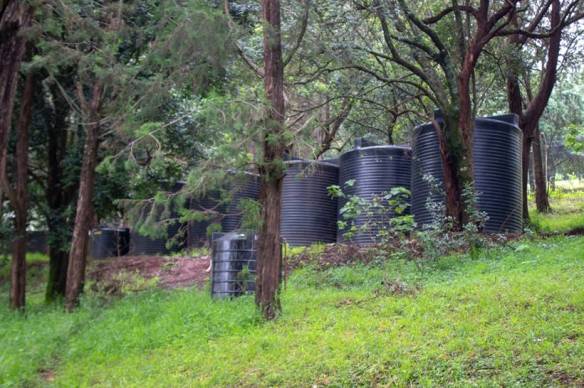 The five large tanks in this photo are the Moffat reserve tanks. 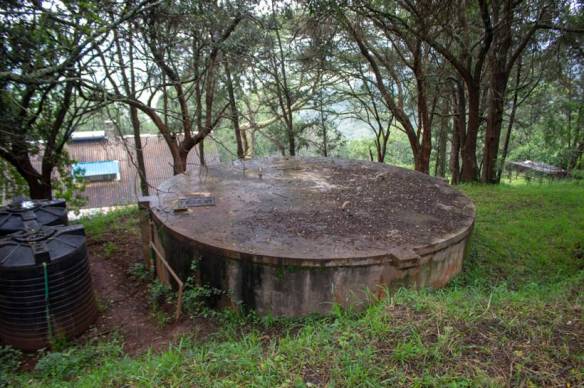 This is the Moffat concrete tank – the majority of the tanks is underground. 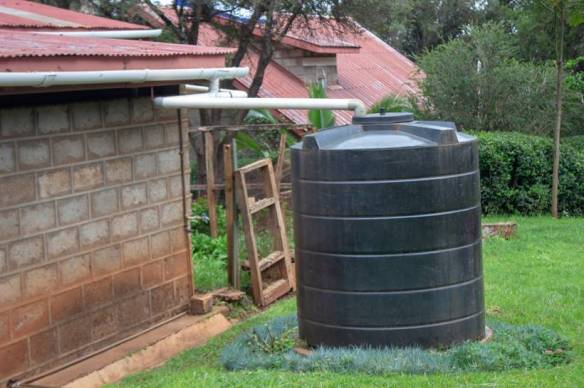 Many houses and building also have gutters and tanks to collect rain water. This is our rain water tank. It’s good for backup water if necessary and for watering our shamba (garden). 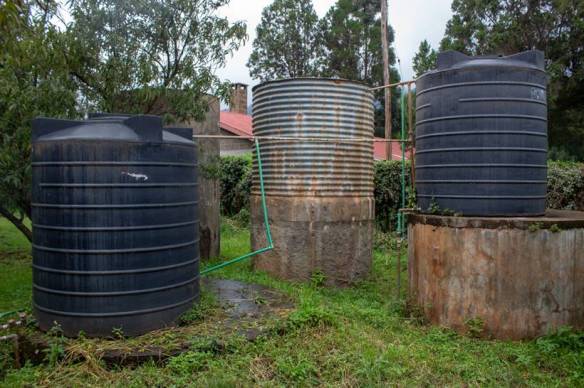 Many houses have smaller tanks which also provide a few days of backup. We have a smaller tank (pictured above on the far right) and can stretch it out to about three days if necessary. Stretching means quick showers and flushing only when necessary.

Kenya has two rainy seasons – October/November and March/April – although the rains typically come when they come . . . not exactly adhering to the calendar expectations. Over the last few years we’ve often found ourselves in drought and have simply had to conserve. During rainy season, the famous phrase “Water, water everywhere, Nor any drop to drink” from “The Rime of the Ancient Mariner,” by Samuel Taylor Coleridge often comes to mind. No, we’re not stranded in the middle of the ocean with only salt water in sight, but we often find ourselves inundated with rain but no water in the pipes. Typically, the issue comes from dirt in the pipes from the springs which cause blockages and then broken pipes. During the dry seasons or drought, pipes from the springs are often cut and the pipes/water stolen. In other words, water is always an issue in Kijabe.

As I noted before, you can’t drink the water out of the tap. Our Katadyn filter is a lifeline for clean water and well worth the $300 investment. 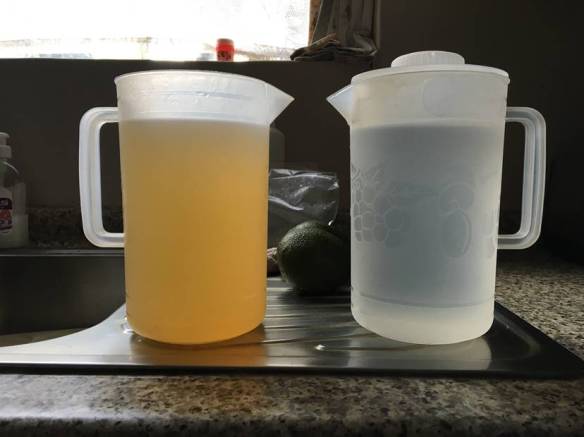 The pitcher on the left is out of the tap and the one on the right is water run through the Katadyn. 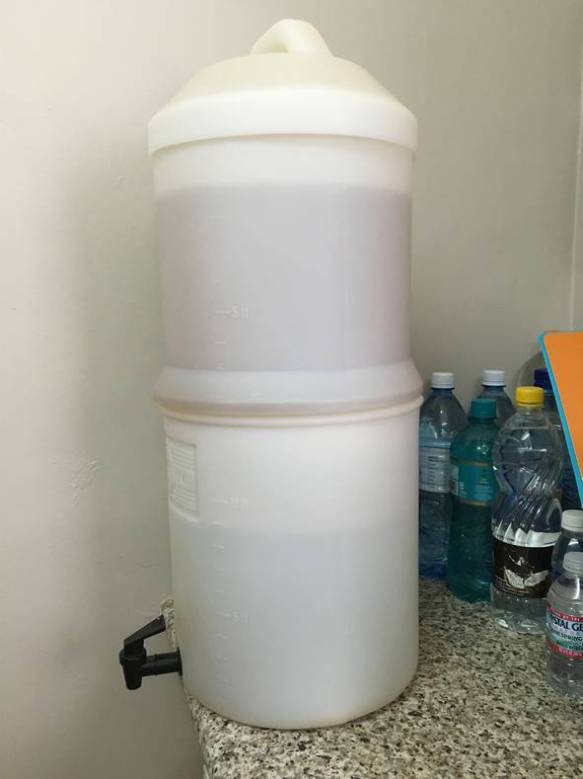 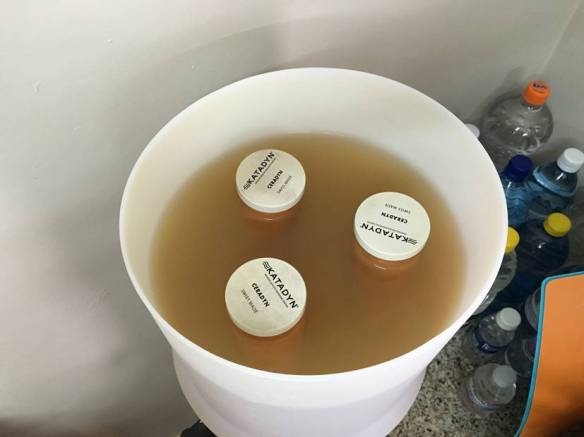 The Katadyn has three ceradyn filters which are porous. The water slowly seeps into the filters and drips into the clean water compartment at the bottom. It’s not instantaneous but very functional. It filters out bacteria, protozoa, and most viruses.

When we moved into this house in July of 2014 there was an electric water heater. However, it sprung a leak about a year later and we had it removed. It had been piped into the bathrooms but never the kitchen. We did have a fall back for showering, though – what many of us affectionately call the widow maker (the photo below is similar to what we use). Just imagine 220 volts just above your head – hence the nickname. When we first moved into the house, I (Tim) accidently touched the instant shower head while taking a shower. The tingle I felt in my feet told me something was wrong! I called my trusty electrician and he double grounded the shower head. 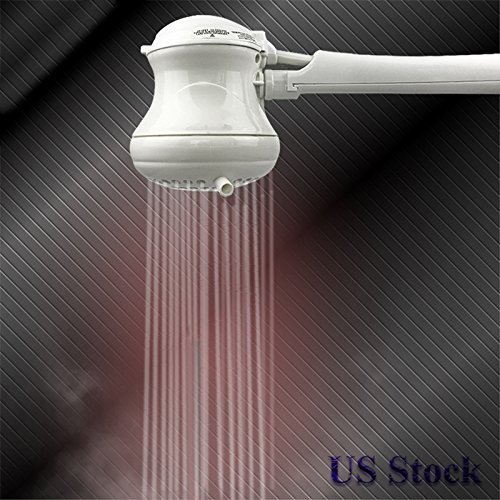 Eventually, we opted to install a solar water heater (pictured below) and piped the hot water into the kitchen as well . . . but we still use the widow maker when needed. Yes, that is our roof and our solar heater. Yes, that is a TV antennae but we don’t pick up anything! The solar heater was a small investment but the electricity saved sold us on the technology. Basically, water flows into the glass tubes, heats under the sun, and then flows into the tank. The tank also has a heating element if necessary – something we do use during winter when the sun is less intense. 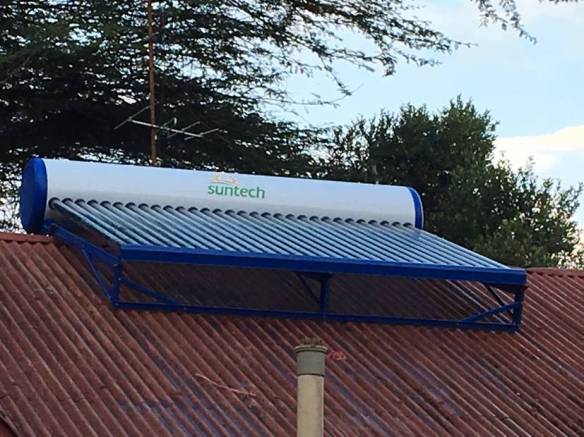 Currently, Kenya is in the middle of the long rains which began in March. Typically, these rains would last about a month but are still going on. A friend in Kijabe posted on FB that from Feb 28th to May 14th, a total of 76 days that it had rained 63 days. And the rains continue. This has caused a great deal of flooding, mudslides, and loss of life, crops, livestock, and property. Below is a photo of a professor from Scott University as he attempted to cross a flooded street. I’m told he and his driver got out safely. 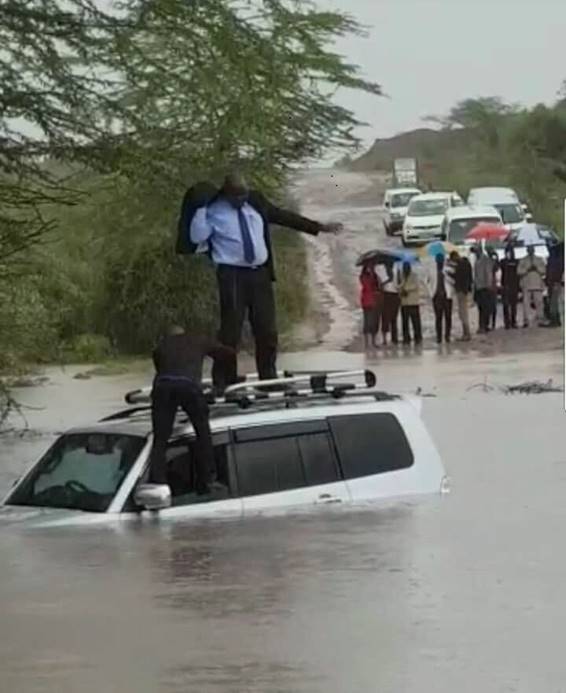 Electricity is very inconsistent throughout the country. Cities like Nairobi are much better but you could still expect to be without power often. We are blessed in Kijabe to be near two hospitals which need electricity and have large generators to supply power when needed. Moffat is tied into the Cure Hospital generator (generator building pictured below) and we have power 90 to 95 percent of the time. If national power goes out, we wait about seven seconds and the generator kicks in. When national power comes back, the lights blink as the generator shuts down. On occasion we get cut off for a day or so for some sort of maintenance or if the hospital is low in fuel.

At the beginning of April we were in upstate South Carolina visiting some good friends who had served in Kijabe. As we ate the continental breakfast at the hotel one morning, the power went out and none of us blinked. We just kept eating and talking. Other hotel guests started to become a bit agitated . . . as did the hotel employees. One of us eventually commented on the fact that we had clearly been conditioned by our time in Kijabe. It’s amazing what you simply get used to. 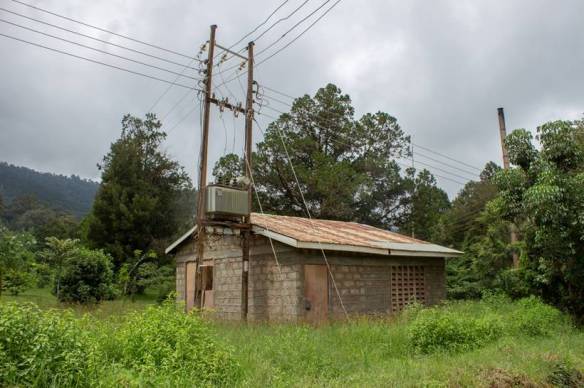 You might find it a bit odd, but we have both 110 and 220 wired in our house. This is somewhat common in Kijabe houses and speaks to the heritage of American missionaries in the region. There is a large step-down converter tied into the circuit breaker box which regulates the 110. It’s more of a convenience given that we have very few items which need 110.

Like many African nations, Kenya relies heavily upon cell phones for communication. Land lines do exists but are not really that common in the rural regions. But, everyone can get a cell phone. There is no monthly bill or service charge. You just buy a sim card (100 ksh – about $1), add airtime and go. If you run out of airtime, you can receive calls but not make calls. Cell data is also available, with speeds ranging from 2g to 4g depending on location. Of course, there are also many dead spots throughout the country. We have used 3g for our home internet in the past but about a year ago the Moffat campus was wired for wireless internet with Access Kenya. We live so close to the campus that we tap into the signal with a wifi range extender. The speed is a fairly slow 6 megabits per second but functional. You just have to get used to the fact that student use drags down the bandwidth in the evenings and weekends.

There is certainly more that we could write but this should give you some insight into our living conditions with regard to “basic” utilities. While there are inconveniences, life in Kijabe is not all that bad!